Google’s Upcoming Mobile-First Index: What You Need to Know

Google has traditionally relied on the desktop version of websites to complete its process of crawling, indexing, and presenting content in SERPs (Search Engine Results Pages) based on what you searched for. In an upcoming change, Google will be switching that on its head to crawl and index content based on what’s rendered for smartphones. Essentially, they are moving to a mobile-first index. It’s not a scary as it sounds, so let’s walk through the most important details you need to know.

Google’s current indexation process came well before the rise of mobile devices. When feature phones (remember the wildly popular Motorola Razr?) first started connecting to the internet and rendering websites, Google created Googlebot-Mobile to crawl them and the first generation of mobile sites designed for feature phones. The next evolution was smartphones - iPhones, Android, and Windows Phone. The internet responded by creating websites specifically designed for the smartphone through subdomains and responsive design.

Googlebot-Mobile crawled early smartphone-friendly websites as well. But eventually, the capabilities of smartphones led to websites with logins, video, social sharing, e-commerce and more and Google had to adapt its mobile crawlers once again. Now in the present day, Google sees more searches conducted via mobile than desktop, a milestone actually reached in 2015. Because of this, Google feels it is necessary to evolve once again in order to keep its search engine modern.

Now that mobile search is the dominant behavior, Google wants their core product to consider the smartphone first. It will crawl and index content based on the mobile version of websites, even if the user on a desktop device.

When is this happening?

Experiments with a mobile-first index started in late 2015 and Google had hoped to roll this out worldwide by late 2016. But most recently in April, during an SEO conference, Google representatives were hoping that the change occurs by the end of 2017, though it wasn’t likely to.

What will happen to my rankings?

The answer to this is what’s causing the delay, and the first reason why you can breathe a sigh of relief. Google wants there to be no significant change in search results and rankings, in fact as close to net-zero as possible. If more websites have been adopting a responsive design, then this makes sense. You’re serving the exact same content for mobile and desktop users, so how Google crawls, interprets, and ranks that content shouldn’t change. And websites that aren’t mobile-friendly still get crawled in the same way.

What should I do?

If your website is not mobile-friendly at the moment, you have a second reason to not panic. You won’t disappear from search or have drastic drops in traffic. If no mobile version of a site is detected Google will still crawl, index and rank what you have. But it’s critical to start considering a new, modern site to address mobile users.

Smartphone penetration (the percentage of device owners that have smartphones over feature phones) reached over 88% in the US in 2016. There is a growing shift as well, especially from younger people, towards using smartphones as their primary internet browsing device. Consider as well studies that show poor user experiences on non-mobile-friendly sites leads to higher bounce rates, lower conversion rates, or lower brand trust and you have some very compelling reasons to finally update your site. 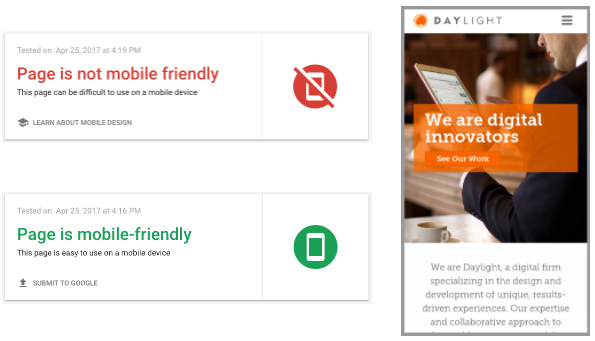 If your site is mobile-friendly, double-check what content is being served to users. Many mobile websites are designed to show less content than their desktop counterparts to streamline the user experience based on intent. In this new mobile-first index, hidden content is at risk of not being crawled and could negatively affect what gets surfaced to search results regardless of device. This is why responsive design is widely recommended and a core focus in our design philosophy here at Daylight.

It’s easy to take the first step and evaluate a few pages of your website with Google’s Mobile-Friendly Test tool. If it’s not mobile-friendly, then it’s time to have that conversation and consider updating.

Though I’ve covered the most important questions, there is a lot more to know regarding this update. Search Engine Land has a great guide to all the questions that have gone unanswered in this post.