Recently I had the pleasure of attending MozCon 2015, a top search engine marketing conferences held annually in Seattle. For those not familiar with Moz (or their previous moniker SEOmoz), they offer a full suite of SEO analysis and research tools used by thousands of marketing professionals worldwide (they also have one of the best SEO blogs around).

MozCon itself is a three day whirlwind of industry leaders presenting on the latest strategies for SEO, content marketing, social media, analytics and a whole lot more. Throughout each session, there were three consistent themes disruption, a focus on the user, and the future of search. Here is a recap of some of the best ideas shared.

The founder, former-CEO, and “Wizard of Moz” Rand Fishkin kicked off the conference with a look inside Facebook’s Little Red Book, which is given to every new Facebook employee. In it was the quote, “If we don’t create the thing that kills Facebook, somebody else will.” The moment you get complacent online (believing you’re done after ranking #1 or increasing conversion rates by 2%) is the moment you start failing. So with that Rand posed the question, “Are we willing to disrupt our own model in order to innovate and grow?” Throughout the week we saw how, if we were willing, to do just that:

Google is willing to disrupt itself. Rand continued his opening session by highlighting how Google did this twice: first by being willing to kill display ads and second by sacrificing a huge opportunity to make more money within mobile in favor of a better user experience.

Implement radical page redesigns every 6 months. Chris Dayley encouraged us to do so because that’s how frequently the average users’ behavior changes . Users get accustomed to seeing new trends across the web and tend to start ignoring them. In the spirit of disruption, we have to change along with those trends as well.

Disrupt your idea of success online. Wil Reynolds of SEER Interactive highlighted the vacation rental industry. For years VRBO was more focused on the traditional sense of SEO and obtaining top rankings. Sure, that worked for a while but then out of nowhere arrived an upstart company named AirBnB, focusing on the emotional response of traveling in all efforts including their website, online ads, and TV spots. Are they ranking #1 for these efforts? Nope, they hover around #8 for “vacation rentals.” Instead, their definition of success was to win the hearts and minds of users in order to increase branded search and to simply drive more revenue. AirBnB does not care about being ranked #1.

It’s not just companies that benefit from disruption. As mentioned earlier, Google was willing to disrupt the very notion of making more money in favor of users. Now, more than ever, the web needs to create with the user in mind. This manifested itself in many sessions during MozCon:

Benefit from what we know about our users. Cara Harshman (click to see the full video of her session) described how remarketing works best when targeting happens throughout the sales process - think products left in shopping carts on a site. Smart businesses will know you want that product and will follow up with a discount offer. Websites can also be personalized based on a user’s location, pre-sale vs. post-sale users (a sales phone number, then a support center link), or by using the referring keyword in content.

Go beyond pageviews in remarketing. Marty Weintraub took this a step further, outlining how you can go beyond remarketing by targeting not only what pages people viewed on your site but, too, by importing more data on users. For example, take third party data on income and/or credit scores to target users more likely to buy high-priced items.

Build content that drives loyalty & engagement. Content itself can be a driving force when it’s designed to engage and build loyalty with users. Matthew Brown presented the perfect idea of this with the article “What is Code?”, a long but well thought out piece from Bloomberg. Despite being over 38,000 words long, author Paul Ford is able to keep users engaged with interactive elements, fun “easter eggs” and a certification at the end for reading all that content. This is content marketing done right.

When in doubt, go back to 1890. Wil Reynolds’ session introduced earlier led off with a quote from the 1890 book Scientific Advertising: “The best ads, ask no one to buy, but they are based on the knowledge of human nature, writers know how people are led to buy.” Remember AirBnB’s case above? They focused on the emotional appeal and human nature of travel rather than a direct sell, and it worked.

The Future of Search

Yes, there were a lot of sessions that helped inspire us as creators and marketers on a deeper level, but given it was a Moz conference you know there were sessions much more technical in nature. SEOs love getting in the trenches and talking optimization, SERPs, link building, etc. To satisfy SEOs in attendance, sessions covered both current strategies and tactics, as well as trends for the future.

Google Search is now a dual proposition. Dr. Pete Meyers led with the highlight of Google’s evolution from 10 blue links to what now includes Direct Answers, AdWords & Shopping, local listings and Knowledge Graph Cards. In some cases, a query only shows 3 or 4 organic results. And Google is working to automate this crawling/information sharing even more efficiently. So for the future of search, you have two options:

And Facebook is well beyond just interests now. In March this year, they acquired product search site TheFind (so you know it will get into the shopping space at some point) and in content publishing, they released two new features as well. Want to easily share a popular link you read earlier today? No need to go to Google, search the article, copy and paste into your status update anymore. They are now testing Add Link, where you can just search within Facebook for articles and post straight to your timeline. In May, they released Instant Articles for publishers, where rich, interactive content can be published directly to Facebook instead of just dropping a link.

A two-algorithm state: Rand, back again for the final session, discussed the present and future of Google algorithms. His fundamental idea was that we live in a two algorithm state. First, you have the traditional idea of SEO inputs, what we manipulate on our sites - keyword relevancy, crawlability, etc. Although these factors can be complex and ever changing (some tactics that worked 2 years ago don’t anymore), they still serve as a critical foundation. Since 2013, Google has also started using machine learning to take these inputs from us and process them faster and smarter. 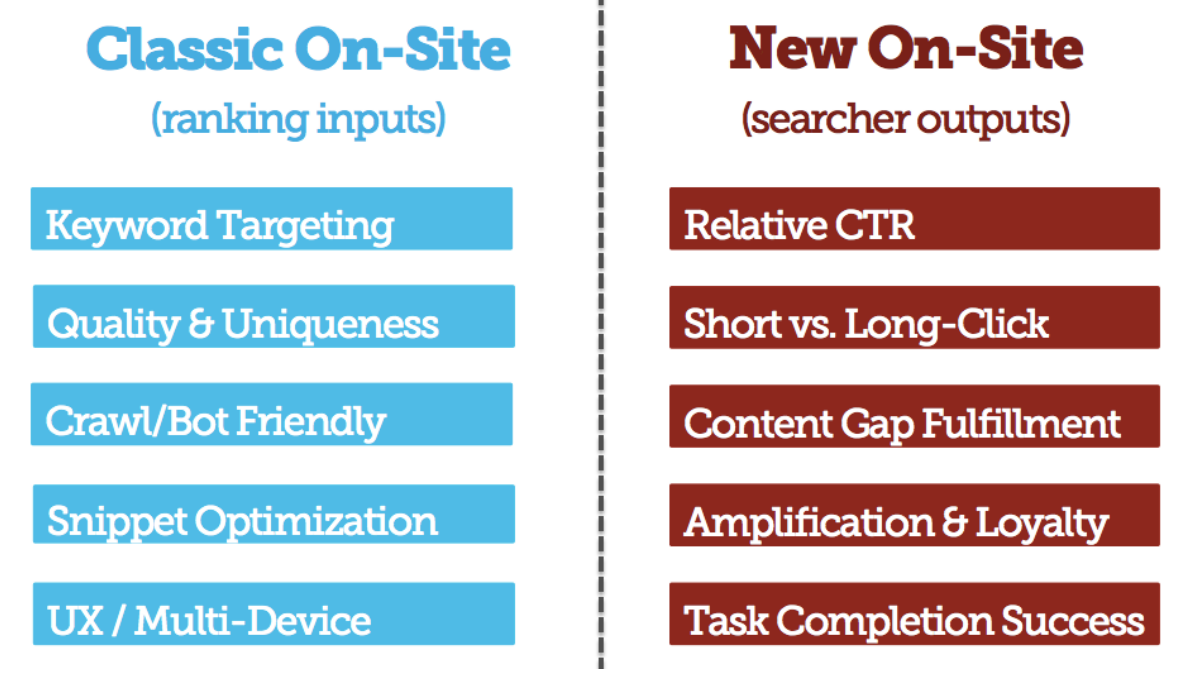 Growing in importance however are output factors. That machine learning system Google is building upon also looks at what makes a good search result. Factors include relative click-through-rate, task completion rate, and short vs. long click engagement. Every element in a SERP listing and your website can affect these outcomes. And once again you’re considering the user - content that fills their conscious/unconscious needs, speed, delivering the best UX, compelling them to go deeper in your site and avoiding annoyances. In the end you have a balance of optimizing a site for inputs and outputs.

Here’s to the Future

As you can see, MozCon was not short of substance. Three days provided a roadmap for marketers and creators to push efforts forward and make the internet a better place. Among the most resonating takeaways for us at Daylight, our process for building websites will have to look at the new balance between ranking inputs and searcher outputs. We’re also working with more clients on paid search, so I am very excited to explore the opportunities to incorporate more remarketing and gain insights from the power of Facebook search.

With much to think about, I’ll conclude with two small musings. Thank you to Moz for providing all-you-can-drink Stumptown coffee. Portland is not that far away from Seattle, but it was a nice touch of home nonetheless. Also, there was quite the geographical presence at MozCon with attendees coming from England (via Vancouver, BC), Germany, Holland, Ireland, India and nearly every state in the US. Amazing. 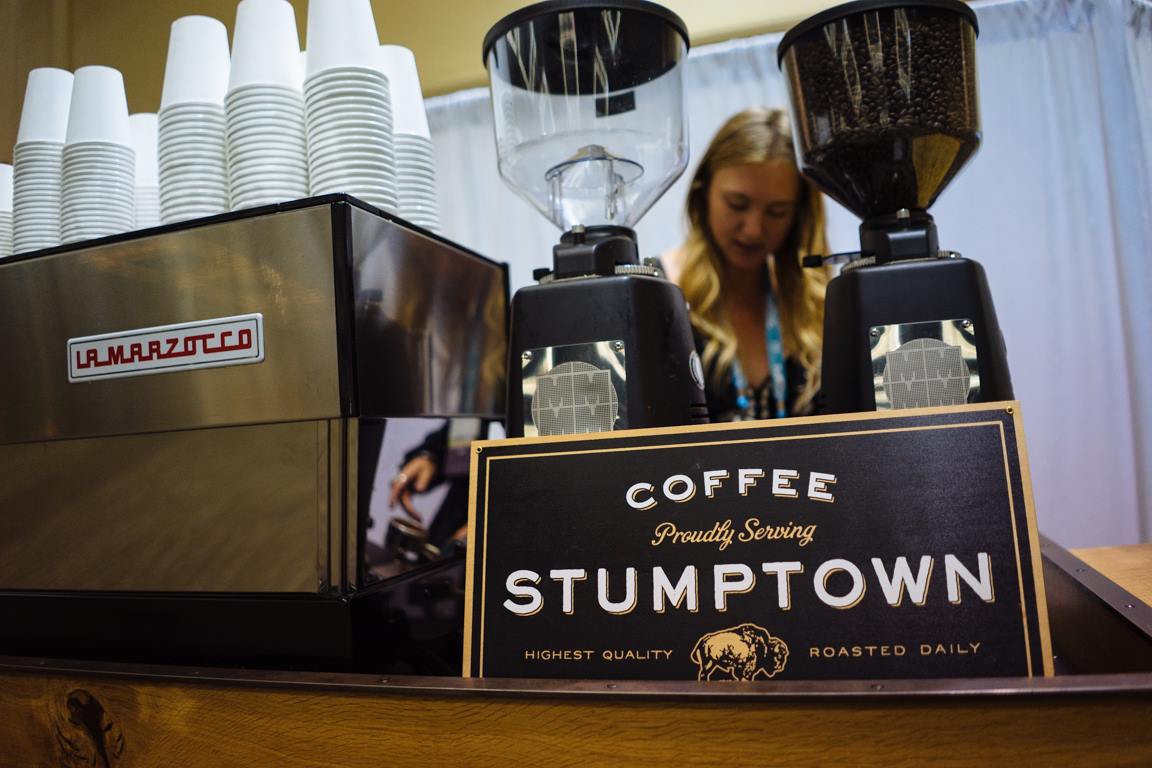